Your solar PV system will generate electricity during the day that you can use in your home real time. Without the means of storing any surplus electricity that you don’t use it is exported to the grid. During times when your solar panels are no longer generating electricity, or generating insufficient for your needs, you will need to pull more electricity from the grid, which you buy from your electricity supplier.

Battery storage systems overcome this problem by storing the spare electricity you generate (that would have been otherwise fed back to the grid) allowing you to ‘time shift’ your self-generated electricity to a time of day that meets your demand when the solar might otherwise not be generating. 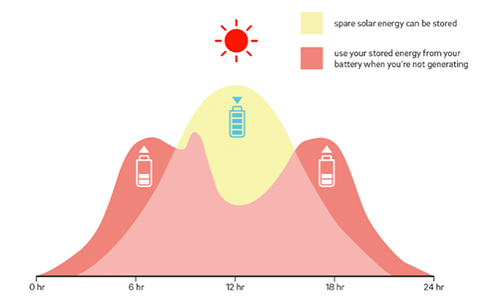 The yellow area represents the electricity not being used in the home at the time it is generated by the SolarPV system, this would normally be fed back to the grid. The dark pink areas represent the same spare electricity which can now be stored in batteries to be used at higher demand times.

Whether installing at the time of your solar installation or doing so retrospectively we can advise the best route for you. Battery technology should be viewed over the long-term to optimise your investment in solar, but also to reduce your dependency on the grid and continued electricity price increases.

We work with the leading manufactures of battery and inverter technologies and can install batteries of varying chemistry types.

Get a Quick Quote Online

Simply enter your email below and we’ll be in touch to discuss your quote.